Martin Milan is a pilot who’s trying to keep himself to himself and live a quiet life but finds himself reluctantly involved in all kinds of adventures, his sense of justice and his loyalty leading him to take sides and fight for what he believes in, invariably choosing to stand by the weak against the strong, by the oppressed against the oppressors, by the hunted against the hunters. He is helped in this just fight by an unfaltering luck and lately by a stray dog that chose to tag along with him - a dog hiding a curious shiny ball in one ear... 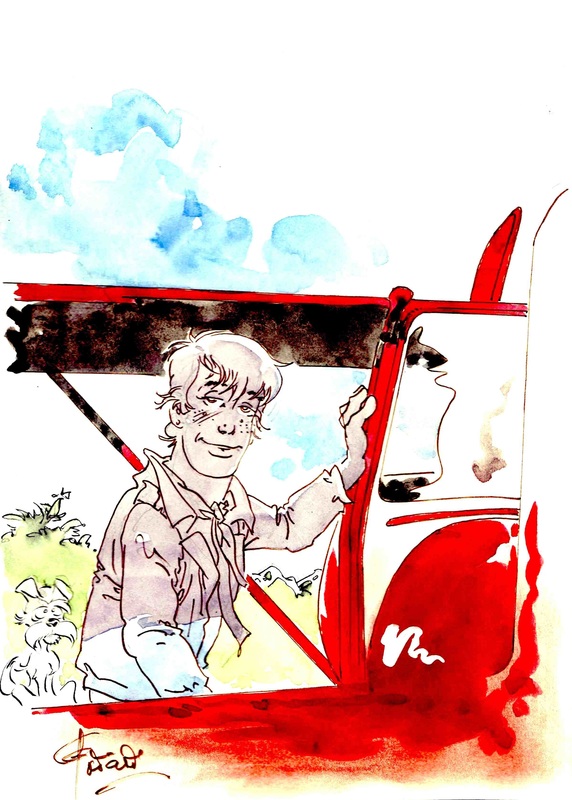 N.B. The Martin Milan comics series can be read in any order, as each book contains one or more standalone stories.
The series has been published several times in the past.
All the episodes were republished online in 2014 on BD-Artstrip.com, as French e-books, in the original chronological order of creation.
We have opted for the same presentation. Numbers appearing on the book covers of previous editions may differ from this order. 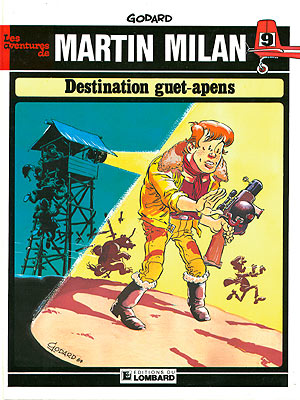 ﻿A mad scientist has designed the Betizooka – a beta-ray gun emitting a laser-like beam that drives people crazy.
Martin Milan finds himself hired by a fake hunter, in order to track down fake bears and actual spies, in the middle of a very real Cold War, in the no man’s land between two Eastern European countries.

This volume also features The Scribe in the Sky, Martin Milan & The Migrating Bird, and The Screwy Bolt-maniac. 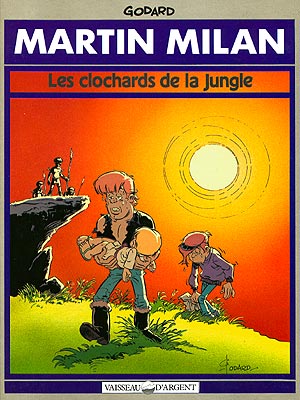 In South America, Little Pierre runs away from school, looking for his daddy, who has gone missing during a trip into the Nica-Rican rain forest.
Sensing a good story, a tabloid reporter, Mathias Gally, agrees to help him track down his father, and hires pilot Martin Milan to take him into the forest.
But the jungle is rife with wild animals, outlaws, Nica-Rican Indians, diamond hunters, and many other perils… 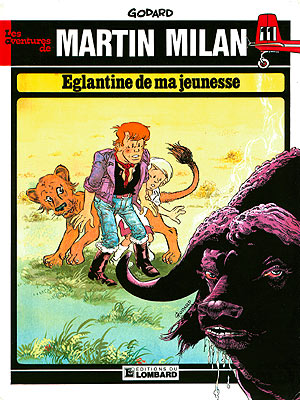 3 - EGLANTINE FROM MY YOUTH

Benji is a young boy living in Africa with Eglantine, the friendly tame lioness he raised ever since she was a cub. His father, however, must go back to Europe, and there’s no way they could take Eglantine with them. Martin is initially hired to take Eglantine back to the African bush, but flatly refuses, knowing fully well that the poor lioness, raised by men, would risk getting shot by poachers. Instead he offers to take her to a Reservation for wild animals, a park where he and Benji will help her get reacquainted with the wilderness. But Eglantine, raised on catfood, and Benji, overprotecting her, both have a lot of growing up to do before they can make it on their own…

Followed by Four Lessons In Optimism. 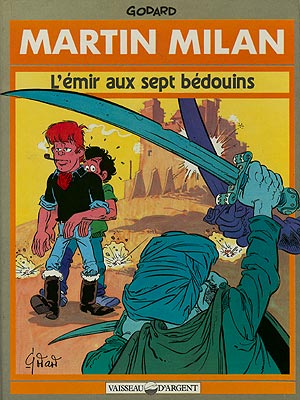 4 - THE EMIR AND THE SEVEN BEDOUINS

Rachid is a sixteen-year old boy, shy and skinny, working as a gofer at a small European airport.
His big problem is that he’s scared of everything and constantly gets picked upon by bullies. Martin Milan befriends him. Suddenly, out of the blue, Rachid learns that he’s the only male heir to a dynasty - a very scary responsibility !
However, Martin agrees to come along with him to his tiny emirate in the Persian Gulf. There, they find that, along with his title, Rachid has also inherited an enemy… 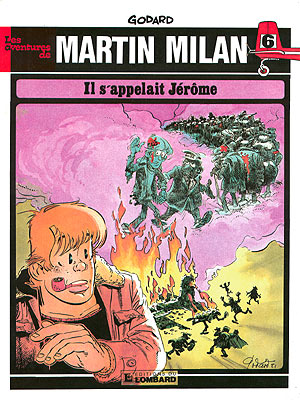 As a child, Jerome was Martin Milan’s best friend, following in his footsteps everywhere he went, living in his shadow, playing the same games, dreaming the same dreams. However, Martin’s talent and luck had always been as obvious as Jerome’s lack thereof, and as they grew up, it became increasingly difficult for Jerome to emulate his role model. And when the time came to apply for their pilots' licenses, Martin brilliantly succeeded, while Jerome had to try again and again…

An unforgettable tale of friendship and solidarity, which moved an entire generation of readers, followed by four other stories, The Impossible Within Reach, As Long as a Dog Waits for You, Miss Radada and The Caller. 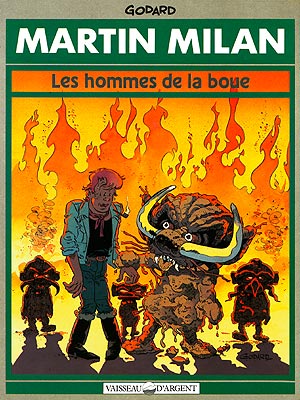 In the New Hebrides, Martin must crash-land his plane on a lost, forgotten island - which used to be an army base. There, the villagers have kept idolizing the 'Cargo god', who used to bring them gifts, food and medicine from the sky during the war. Martin and his unwitting passenger, a corrupt politician on the run, find themselves among a poor tribe expecting them to bring back this lost abundance.
But the only thing the heavens have in store for them is a plane full of mercenaries, destroying everything in their wake.
That is, until Martin intervenes… 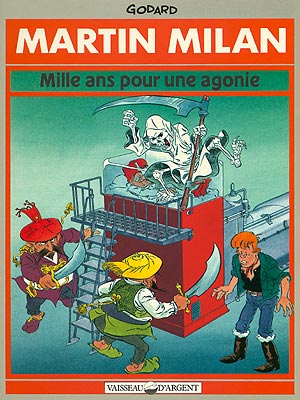 In India, a rich old Maharajah, sensing Death is near, plans to get cryogenized – frozen alive.
He intends to remain frozen in a special tank for a thousand years, expecting that by then, science shall be able to revive him and cure him from all the drawbacks of old age, making him immortal.
However, many things could happen during a thousand years, so, being rich is not enough to guarantee survival, he needs to be lucky, too. Hearing of pilot Martin Milan’s amazing luck, he decides to take him along – without his consent if need be.
However, Martin is a very reluctant lucky charm… 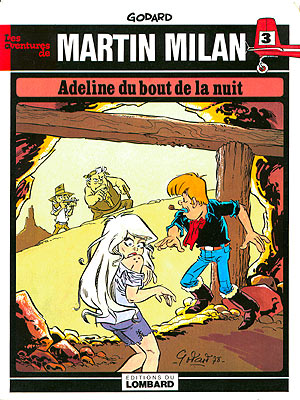 8 - ADELINE FROM BEYOND THE NIGHT

In Arizona, Martin Milan gets blackmailed into conveying a prisoner. She turns out to be a pretty young girl called Adeline, who stands accused of attempted murder.
However, she tells a different story : she says strange men keep chasing her in order to take a look at her unusual beauty mark – three little moles on her right shoulder.
Is she a homicidal paranoid maniac or just a damsel in distress? Martin, as a child, once fell in love with a girl called Adeline, but she was taken away from him.
This time he’s big enough to fight back… 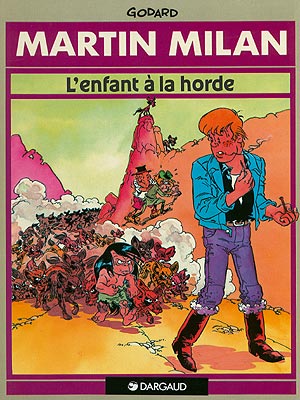 9 - THE CHILD WHO RAN WITH THE PACK

In Africa, Martin gets hired for a very unusual kind of safari by Miss Guinguett, a publicity-hungry cabaret singer, who is planning, with the help of a seasoned hunter, to catch – and adopt – a child raised by a pack of wild dogs.
However Martin always stands by the preys, not the hunters, and besides, this wolf-child has decidedly unusual tastes for someone who was raised in the African bush… 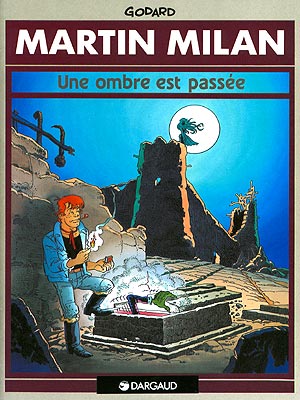 In Transylvaquia, a tiny country lost in the Karpates, Martin crosses the path of several strange characters : a deathly pale Count who sleeps by day and roams at night, some scared villagers dabbling in black magic, a hunchback, an alchemist... And most intriguing of all, the shadow of a young girl, who seems to await him, and whose delicate perfume lingers in the air…
They all are fated to meet, but they do not know it yet... 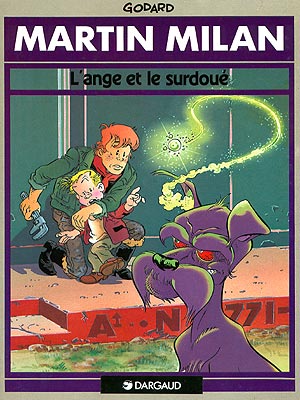 Julius is a nine-year old genius. Despite his age, he has already mastered an amazing number of foreign languages, and his level in science and mathematics is that of a world-class scientist.
His special abilities make him a very lonely little boy, but to make matters worse, his clever mind has designed a terrifying weapon that could prove a threat to all Mankind.
Julius must now run away to protect this scientific breakthrough from any ill use. Having noticed that Martin’s dog hides a mysterious shiny ball in its ear, Julius has figured out that this entity is the secret behind his amazing luck…
And so he comes to Martin for help, tracked down by a bunch of spies all trying to get hold of his discovery… 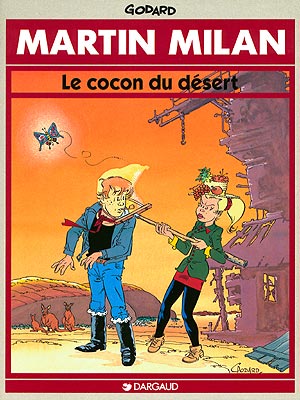 In Australia, Martin meets a strange girl, looking, or so she says, for a very rare species of butterfly. She turns out to be a French special agent, married to the very jealous Othello, a childhood friend of Martin’s.
Back when they were classmates, the two boys made a pact, and now Othello has come to ask Martin a favor, which leads the pilot to get involved in an expedition into the Outback, where some strange goings-on surround a sick little boy… 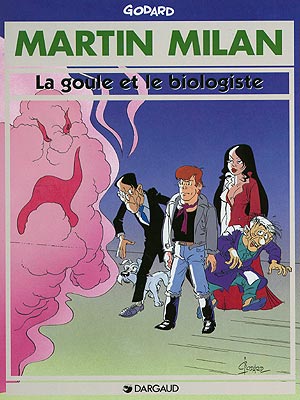 13 - THE GHOUL AND THE BIOLOGIST

Martin’s mother asks him to help a former boyfriend of hers, Gaston Laroque, a rich and famous biologist, who is apparently on the verge of madness. Every night he sees a monster, some kind of ghoul, in his room, even though he’s safely locked up so no-one can get in.
Thus Martin finds himself trying to untangle a web of lies and deceit involving a pretty girl with paranormal intuitions, a compiler of strange facts, a C.E.O. facing bankruptcy and a bizarre guru.
He will definitely need his dog’s help to solve this case. 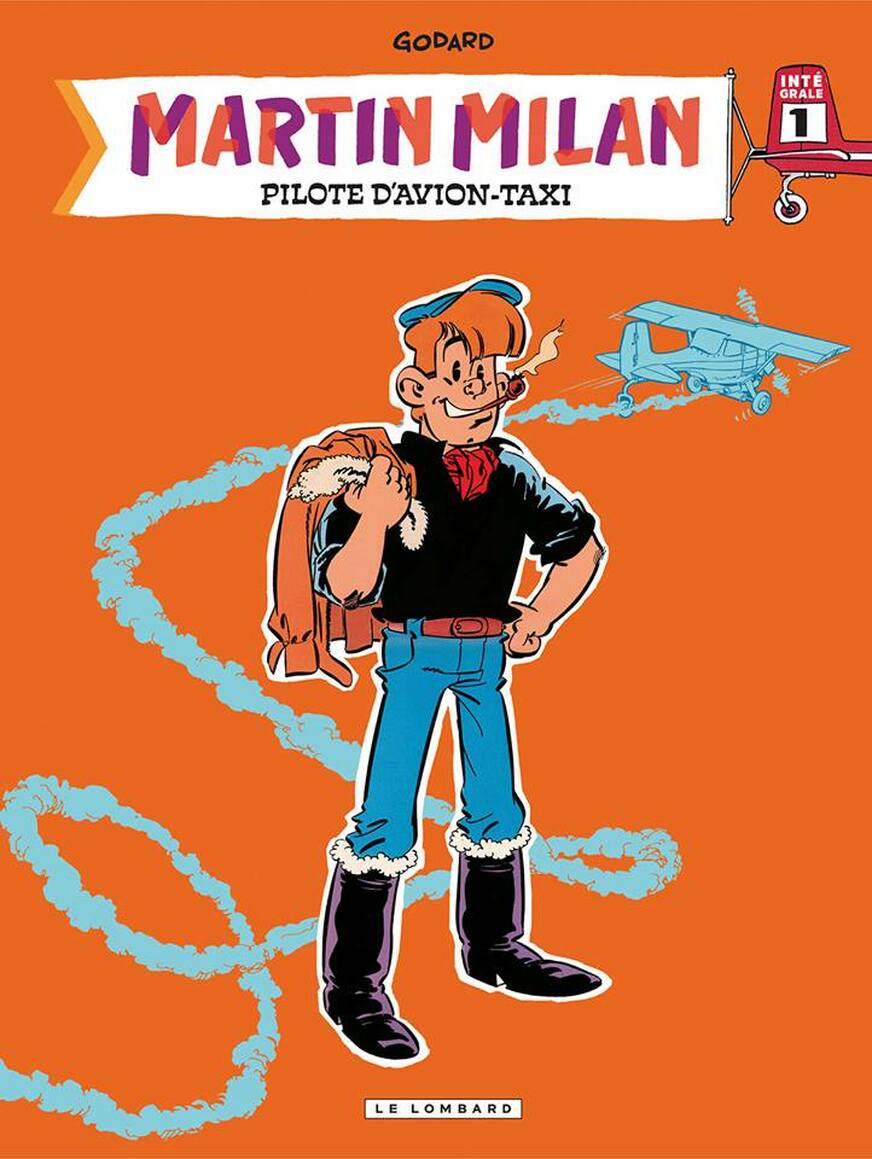 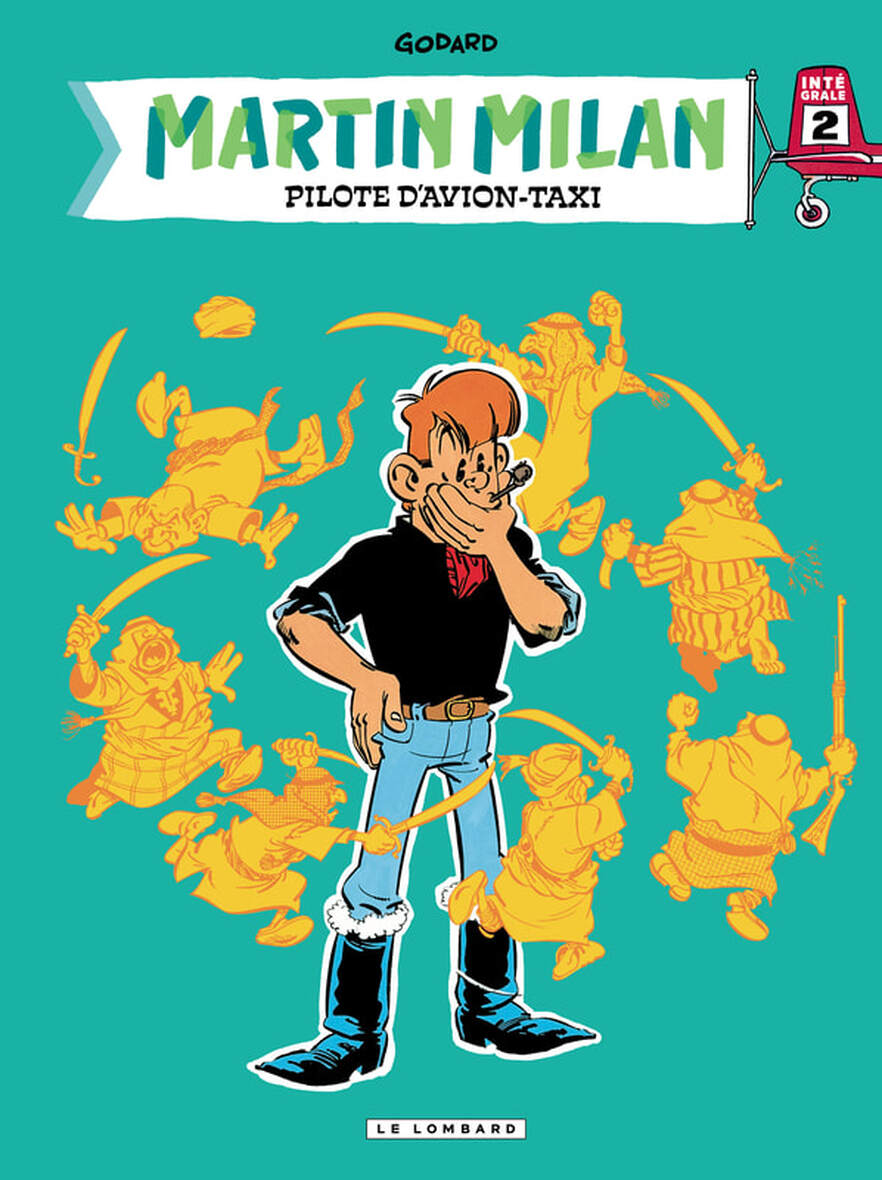 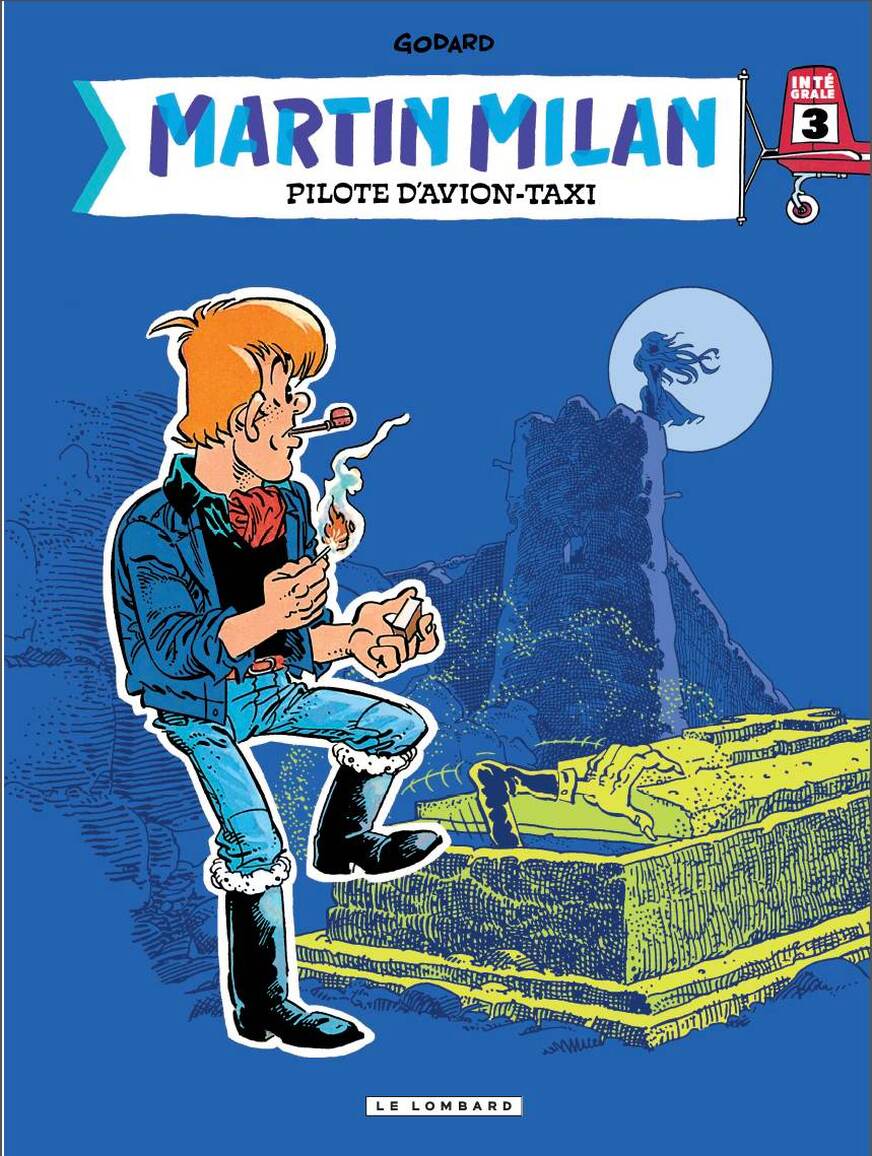 NORBERT AND KARI
Norbert, a Frenchman who has become severely allergic to the sound of car horns, and cannot stand  city life anymore, decides to leave Paris for good, and to settle on the Polynesian island of Taaratatah.  There, he hopes to escape the rat race, but he discovers a curious mix of traditions, ancient superstitions  and the odd invasions of so-called « civilized » people and inventions. So much for peace and quiet !  However, he strikes a friendship with Kari - a young boy extremely eager to learn more about the outside  world, and yet already far more knowledgeable and wise than his grown-up friend. Together, they live all  kinds of adventures in the islands. 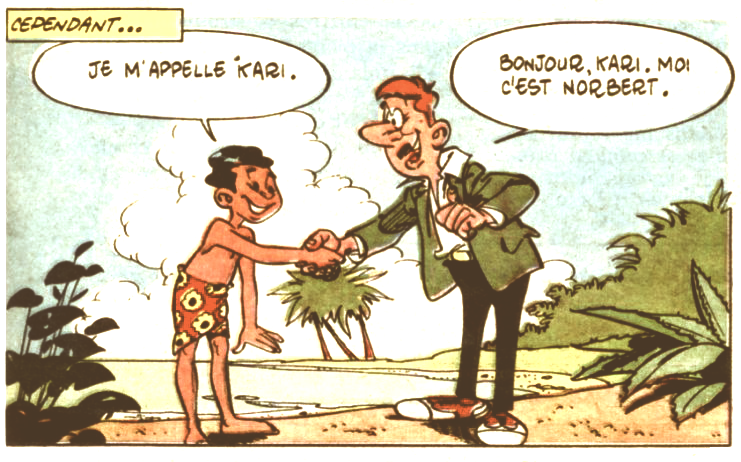 COMICS DRAWN BY CHRISTIAN GODARD ON OTHER WRITERS' SCRIPTS