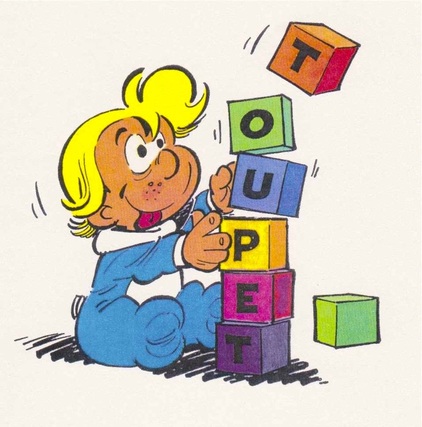 When a newborn baby appears, his parents and all of his relatives see their lives change forever.
Barnet’s family is no exception !
Mr and Mrs Dubois, a young couple, are Barnet’s loving parents. He is their first child.
To them, Danny, aka Barnet - thus nicknamed because of his unruly mop of hair - is the eighth wonder of the world - but to the world, it is another matter entirely. Barnet is not your common garden-variety infant, though. He doesn’t talk much yet, but his first word, “Nah!” is spoken assertively in just about every occasion, including when his father is trying to get him to say “daddy”.
Barnet has no real interest in teddy bears or other cuddly toys. What he likes best is... a hammer, which he uses to destroy everything in his wake ! His mother believes he must have been an auctioneer in a former life...
Then there is his first love – Binette, the neighbour’s dog, who loves him back as only a very patient, big dog can love a toddler. She follows him all the way to kindergarten, looks after him night and day, guards him fiercely, and will even suffer taking a bath just to be a good role model for him.
As for Barnet, he scribbles his first poems in baby talk just for her – much to his mother’s dismay. And then there is the matter of Pappy... Pappy is Mrs. Dubois’s wheelchair-bound grandfather, who has come to live with the family. He’s vying for the attention of Coraline, Barnet’s young and lovely teenage babysitter, and he always gets jealous of Barnet’s privileges... But they happily share a fondness for Mrs. Dubois’s homemade puddings !

Danny Barnet - known as Toupet in French, Lokje in Flemish/Dutch, and Danny in German, is the main character of 18 comic books so far.
A FEW INTERNATIONAL EDITIONS AND REEDITIONS OF DANNY BARNET / TOUPET / DANNY / LOKJE, IN GERMAN, FRENCH, DUTCH...
A FEW MAGAZINES FEATURING DANNY BARNET / TOUPET in France, Belgium, Egypt...
Powered by